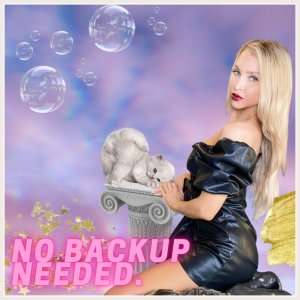 I’ve heard this before, and I’m sure you have too.

Someone you know, or maybe this person is you, does something that many consider “risky.” It might be switching jobs. It might be deciding to start your OWN business. It might be moving somewhere far away.

And (mostly well-intended) people you know start warning you that “You better have a backup plan in case this doesn’t work out.”

“That’s a nice idea, but it sounds like a lot of work, and a lot people in that industry don’t last. Best to have a backup plan.”

“That’s not realistic. You need to be more responsible than that…make a backup plan that you can turn to if this doesn’t pan out.”

And this is precisely when I palm in face.

Because to me, having a backup plan means that you’re not 100% IN on whatever it is you’re doing.

It means that no matter how subtle your backup plan may seem, even though it may sit on the back burner, that there’s still a possibility that exists in your reality of whatever it is you’re doing not working out.

It means that your belief in your mission, whatever that may be, isn’t strong enough. It’s built to NOT last before you even begin.

It means that you’re shaking up the belief that you have in YOURSELF.

If you want to do, have, create, be something or someone…

You have to DECIDE that it’s going to happen.

And you have to DECIDE that you’re going to do whatever the fuck it takes to get there (within integrity and all that good stuff, you get it)

Otherwise, you make it too easy to jump ship when the going gets tough.

While much of life IS all about perspective and what you make of it, sometimes, LIFE will just happen. Stuff will just happen. Shit will hit the fan. And that’s around the time where going right back to your comfort bubble will look MIGHTY appealing.

Deep down, ultimately, I knew that I would be OK no matter WHAT. Even if NOTHING worked out, I would STILL be OK. I would STILL figure my shit out…in that moment. I just never even prepared for that kind of moment.

I never even entertained the idea that MAYBE that kind of moment would arrive.

If you want something badly enough, whether you want to create your own job or move to a new country, you just have to do it. You just have to commit to the fact that it’s happening, know and trust that you’re more than capable of figuring it out along the way, BUCKLE UP, and just keep moving forward. That’s all.