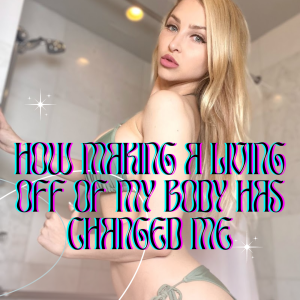 Sometimes, I think of who I would be if I hadn’t chosen the career path I did. Who I would be if I, instead, had chosen to remain in the desk job that sucked the life out of me. I can never know for sure, but I at least like to think I would have eventually reached a breaking point and decided to go into business for myself. Doing what? Who knows. I think about this, but I also think about the fact that to this day, I don’t think there was EVER a more perfect path for me. The one I’m on now is IT.

I believe to my core that me waking up one day and deciding to go ALL IN in such a controversial career, fully knowing that that meant that I could never go work for corporate America EVER (although who knows now because it IS 2022 and people do seem to be more open minded now than ever before), ultimately deciding to fully trust in myself, saved me from living a life that was not authentic to me. It saved me from living a life as a completely different person, masking who I truly was deep down. To me, this choice was the ultimate act of liberation. It was the ultimate act of self-trust. It was the ultimate middle finger to the societal constructs that I felt so trapped in before I chose this path.

When I first got into adult entertainment – first webcamming, then adult film – I was a completely different person than I am today. I was, deep down, so lost. Desperately trying to figure out who I truly was. I had always taken care of myself as far as working out and eating well, and had always loved all things beauty, spending 5 hours at a time getting hair extensions, getting regular spray tans, Botox, filler, going shopping in my free time, etc.

And there is nothing wrong with any of the above, P.S. I still, to this day, love all of the above. But back then, at 25, it was all surface level for me. That was really all I cared about. And of course, getting into adult film, seeing myself in 4K, every single pore magnified, every flaw up close and personal…I saw it, and I “fixed” everything I didn’t like. I compared myself to other women in the industry and would get really down on myself if I weren’t booked for certain scenes, or weren’t “chosen” for special collaborations with certain production studios. For several years, my identity was wrapped solely up in how I looked and how often I was chosen by others. It was an absolute emotional roller coaster, because I had given my power away to everything outside of myself, allowing others to dictate how I felt about myself.

Needless to say, it was exhausting. I didn’t realize it while I was in it, until one day…I did. I think this was around the time that my dad passed away. That was a huge wake up call for me as far as having an extremely painful, but in your face learning lesson in the sense that life is so precious. People are so special. Our lives are so special. We are each unique, special beings with our own gifts to share with the world.

I had this realization, and then shortly after, I dabbled in psychedelics, which to me was like peeling away a fuckload of layers I had built up around myself over my entire existence. It was like I was just waking up and seeing myself and the world for exactly what it was for the first time ever. It was like I finally understood life and what it was all about. (I’m absolutely not condoning this, P.S. I’m simply sharing my personal experience).

From there, I started to completely change my lifestyle. I saw the connection between myself and other people and living creatures, and personally felt like eating meat and animal products were no longer for me. I also became more aware of the affects of what I was putting into my body and how I was treating it. I became a vegan. I stopped drinking. I stopped drinking energy drinks and eating processed food. I started being strict with myself when it came to getting a good night’s sleep every night, letting my body rest and heal itself. I started meditating every day. I started journaling again. I started seeking learning material from books, podcasts, digital courses, etc. on spirituality, which soon became a staple in my life. Nothing else, to me, made as much sense as this stuff did.

I realized that I was just this body – this vessel – that was made out of stardust and was on this huge rock hurtling through outer space at epic speeds, for just a relatively short period of time. I realized that my body and how I chose to present myself to the world was comparative to an art canvas. I realized that with all the hair extensions, beauty treatments, fashion obsessions…it was simply me choosing to present myself to the world how I felt on the inside. And while there is absolutely nothing wrong with that, I had much more to offer to the world than just that.

I realized that the surface level stuff is great. I firmly believe that everyone can and should express themselves truly and authentically to the world, no matter what that looks like. But I also realized that I could do that and also choose to be a better human on the inside, too. I soon became able to edit my own photos without cringing and nitpicking at myself over little flaws I would see…from being too skinny, to having a little extra weight on my thighs, to a hair extension showing, to a ripple on my breast implant, to my ugly ass bunions showing…and instead be kinder to myself, appreciating what I loved about myself, and knowing that I, like every other human, have flawed physical attributes, and not allowing that to sink me into a dark hole of depression because I am far more than just my looks.

I also became more aware of the fact that I’ve worked with so many different women. I’ve seen so many different bodies…huge fake tits, small, natural ones…filled lips to natural, thin ones…straight hair, curly hair, curvy, skinny…and I began to see that the truth was, every single one of these women, myself included, is beautiful in their own way. Every single person is beautiful in their own way. It was like I began to see the souls of others, rather than simply what was physically in front of me.

In recognizing this, I also finally understood that this was the ultimate truth, and that regardless of what trendy plastic surgery is floating around Instagram…what hair color is “in” right now…what body type is considered the “hottest” right now…that none of it actually fucking matters. It’s not that it’s “bad” or “wrong” to indulge in any of these. What matters ultimately is the intention behind it. Whether you’re doing it for you or you’re doing it because you think you need to in order to be accepted and liked. Because while the latter may seem true based on the content we’re bombarded with on social media on the daily…it’s not. And knowing all of this, for me, it’s liberating as fuck. I’m happier and free-er and more confident now than I’ve ever been in my life.

Ultimately, making a living off of my body has taught me that me existing as me is already inherently enough, and that anything I choose to do with my own body is A-OK, as long as I carry the wisdom with me that it’s something I’m doing, not who I am. Because who I am goes far, far deeper than surface level. The same is true for every single human being on this planet.