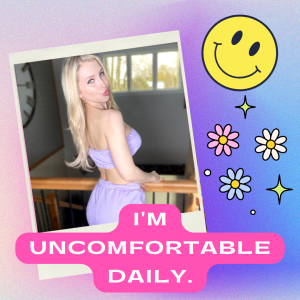 Real talk: I’ve been uncomfortable pretty much every single day since July of 2020, when I moved out of my bubble in LA to New York, to live in nature and unplug from the daily grind of city life.

Why? Well, from spring of 2014 up until March of 2020 when COVID flipped the world upside down, I had a lot of structure. For someone who enjoys her freedom more than anything, you would think I would run for the hills at the sound of the word “structure.” But actually, it’s structure that helps me continue to build my life on my own terms and allows me the freedom I seek. So while I still have structure now (I live and breathe by my planner), it’s a lot different than what I had in the past, and I’m still getting used to it.

See, when I lived in LA, all I did was shoot. Like, every day. If I wasn’t shooting for a company, I was spending my time shooting my own scenes, whether on a set or at home. This is why I literally own like, 1000 scenes. Creating in the form of filming was just what I did. So I would wake up every single day and might not know what I was going to film, but I knew that I was going to film something, which gave me a peace of mind.

But since COVID life, that all changed. Shoots were cancelled and the world went on pause. This gave me, much like so many other people, a lot of time to reflect on the life I was living. And in that reflecting, I realized that I was simply not the happiest I could be. I knew that there was a life out there for me that I would find drastically more fulfilling. I knew this because a. I’m extremely self-aware and I can just tell b. The last time I made a big decision in my life of that caliber was when I decided to move out to LA to pursue my career, and that same exact “it’s time for a change” feeling was back. I recognized it. So even though part of me was like, “God damn it, not again,” (because let’s face it, the process of moving fucking sucks, especially across the country, not to mention this would be another large lifestyle change for me) there was a bigger part of me that was excited at the prospect of switching gears.

So, as I do, I chose to be excited rather than anxious because my happiness and peace of mind is my priority, so as comfortable as I was in my current situation, I knew deep down that it was not my long-term solution. And once I knew that, I couldn’t un-know that.

I also knew that in deciding to move, that life as I knew it would change. At that point, I had drastically cut back on filming for companies and had been hyper focused on filming my own scenes (I personally love to have full creative control over what I’m filming, who I’m filming with, as well as have the ability to collect residuals from my scenes forever which is something that filming for companies does not offer) so there wouldn’t be much of a lifestyle change for me other than having to travel to film scenes. Which was fine by me.

My decision to move was also based on my desire to live a more calm, “normal” life in the sense that I wanted to be and do more than just adult film. I didn’t want to quit,  but I did want to expand more into different interests and passions of mine, and incorporate them into the world I’m building. Stuff like this blog, my merch, brand collaborations, music and more. I also wanted to be a normal human on the day to day, which was not the vibe I had in LA, where all I was doing on the daily was getting up and being an adult actress. There was a part of me deep down that craved more. More connections with more people that were beyond surface-level. More nature. More fun adventures with friends for no reason other than “just because.”

Needless to say, just as I knew, my decision to move was the right one. I can truly say that I have never felt more at peace with myself and my life the way I do now.

Which is in a way funny, because I can also truly say that I have never felt more anxiety or emotional ups and downs the way I do now. Why? Because since I moved, I have been 100% reliant on myself and my team to continue creating, expanding, and elevating. This is opposed to how I used to be, which was me living and working in a tight-knit community of fellow adult entertainers on the daily. Moving away took me out of the thick of all of that.

It forced me, in a good way, to get really crystal clear on exactly what I wanted out of life, and how I wanted it to look and feel. This is a tricky place to be because I’m the boss. I’m not following any sort of person, blueprint or trail. I’m clearing and creating my own. Which is equal parts bliss and absolutely maddening, depending on the day 😉

While I am still structured and have a set schedule of to-do’s on the daily, it’s a whole lot more of putting out small fires throughout the day, waiting on deliverables from people I’ve hired to help me do things like editing, a lot more back-and-forth phone calls with my team, etc. A far cry from my LA self, which was….go to set, come home, sleep, go to set…you get it.

Nowadays, each day is a blank canvas where it’s up to me to decide what I’ll fill it with. Not my agent. Not the circumstances of my schedule lining up with another talent. And while I am wired for this and couldn’t imagine living any other way, that doesn’t mean that I’m not freaked the fuck out sometimes, or that I don’t catch myself in a spiral of “I hope this works,” and/or wondering if I am indeed certifiably insane.

So instead of holing back up in my comfort bubble, I choose to embrace the uncertainty, no matter how comfortable the former may be. Because from what I’ve lived, it’s in the places of uncertainty that I’ve experienced the most expansion into the next-level, best version of myself. And I wouldn’t trade that for anything.