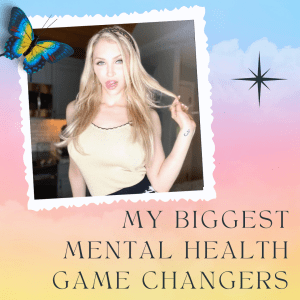 Up until four or so years ago, I knew about mental health and how important it was, but I figured I was fine and didn’t need to manage my own. I mean, technically, I never had any sort of mental health disorder. I’ve always been super disciplined, so I figured me just getting up daily, working out, eating right, working, and overall living my life was good enough.

That is, until I really started elevating my entire approach to wellness (which was right around the time I began exploring my spiritual side), where I began recognizing that every part of me is connected.  I began recognizing in meditation that my thoughts were just thoughts and weren’t true unless I decided to make them so. I began noticing when I would have negative thoughts and questioning them, then deciding to release them and replace them with brand new, better-feeling thoughts. I basically learned how to control my mindset, and became really good at it. Which, by the way, literally anyone can do if you commit yourself to doing it daily and integrating it into your life.

In doing this consistently, I slowly began to change as a person. I became more calm and less reactive. I became more confident. I became more in tune with myself and really learned how to listen to and trust my own intuition over anyone else’s opinions. I became more certain of my own beliefs and values, and became crystal clear on who I wanted to be and what I wanted my life to look like. I became more equipped to be able to enter an annoying situation, like dealing with flaky ass people cancelling last minute on shoots, and rather than getting pissed and letting it ruin my day, adopting the knowledge that it was just one thing that happened that had nothing to do with me, releasing my frustration, and instead deciding to pivot immediately and change my plans.

On my journey to become a true master of my own mindset, I also learned stuff like removing and rearranging my limiting beliefs and old stories around areas like my work schedule, finances, setting boundaries with other people, feeling really comfortable saying “no” without worrying about upsetting someone else, and that everything I need to create, say, do, and/or bring to life is already within me. Yes, this shit goes deep.

Like I said, literally anyone can do this with daily, consistent practice. I wasn’t born wired this way. I taught myself how to be this way.

Here are some of my favorite tools and tactics for mastering my mindset and drastically improving the state of my mental health:

I’ve ultimately realize that it’s been in the small (but consistent), day-to-day changes I’ve made in my life that really add up over time and have ultimately made a huge impact, for the better, on the state of my mental health. All it takes is deciding to take it one moment, one day at a time, because it’s from the present that the future is created.