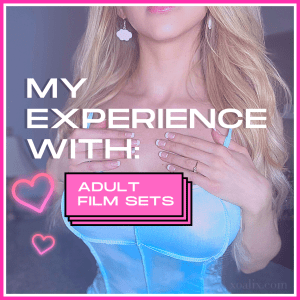 From the outside looking in, the world of adult entertainment has an air of mystery about it, full of a WHOLE lot of preconceived notions and misconceptions about what actually goes on. Which is all understandable, because to know what it’s like to actually work in adult film is far from being common public knowledge. From my own experience with chatting with fans on social media and with “real life” friends in my social circles, I’ve heard it ALL.

“I heard everyone just does drugs all day.”

“I heard everyone just bangs everyone on set.”

Like I said, I GET the reason behind why there’s so much dramatic speculation around WTF actually goes down on set, because it’s not commonly discussed. I’ve been in the adult film industry since 2014, and have spent days on set COUNTLESS times over the years. Which is exactly why I’m about to break it down for you. 😉

Most sets are either someone’s house that’s been rented out for the day (it’s also super common for performers who are homeowners to rent their places out) and, on occasion, at an actual studio. (The latter is fairly rare – there are a few actual production studios that I’ve been to that are still running, but the vast majority of sets are at someone’s home).

I always get the set address and call time ahead of time – the latest is the day before the scene. When I was living in LA, most of the sets were in homes in the San Fernando Valley (my personal favorite because then I wouldn’t have to deal with much of LA’s horrific traffic to get to work on time). On occasion, set locations would be in more random places like Beverly Hills and even down near Long Beach, which, if you’re not from LA, is an absolute bitch to get to if the call time is in the morning or during afternoon rush hour.

Most filming for companies is done in LA, Vegas (both of which I did often) and some in South Florida, which I’ve only done a couple of times. All of which are, still, either at someone’s home or at an actual studio.

When working for companies (which, in my world, is a REALLY special occasion nowadays because I much prefer to produce my own scenes at this point in my career) I also get the scene info ahead of time, like the script, what the scenario entails, who my scene partner is, who the director is, who to contact the day of the shoot, what wardrobe to bring, and whether or not it’s DIY hair and makeup.

So, I get to set. As soon as I arrive, I walk right on inside. I tend to be an early bird, so sometimes I’ll have to wait in my car for the director to get there. If I’m getting my hair and makeup done on set that day, I’ll be meeting the makeup artist first. So, I’ll go inside, get my suitcase and belongings situated in a private changing room, throw my slippers on (I LOVE to be cozy) and go park my booty in the makeup chair to get glammed up.

So, makeup. I’ll sit in the makeup chair and get glammed. While this is happening, the crew will start to trickle in. I’ll typically be handed paperwork to fill out, which happens on every set, while I’m getting my makeup done. Efficient AF. Once all the paperwork stuff has been handled and I’m glammed up, I go say hi to the crew and whatever other talent is there.

The industry is small, so it’s a vibe of everyone knowing everyone. Just like any other profession, the people involved with the production, from the makeup artist to the PA to the director, etc. (crews these days are pretty small as well, P.S. It’s usually 2-3 people, maximum, in charge of the operation) are, well, real fucking people. Many have spouses and kids of their own. So, just like any other job where people are comfortable with one another, we shoot the shit and catch up for a bit before it’s time to get to work.

If there’s another talent who I haven’t yet met/worked with, I always introduce myself and chat with them. I mean, we DO have to perform in a scene together, so it’s super important to build that rapport and get on a friendly vibe with one another. If you know me, you know I believe that vibes are fucking everything. ESPECIALLY if we’re filming a scene, which is almost like a kind of dance with your scene partner(s). It’s ALL about flowing together naturally and putting on a kickass performance for the viewers at home. So, needless to say, it’s important to take time to connect with that person before the cameras fire up!

97% of the time, the crew and performers are professional, chill as fuck and WANT to be there, so it’s a good vibe overall.

I can count the number of times I’ve had weird experiences on set on one hand…stuff like getting there to find another talent having a total meltdown, a creepy director, a weird-vibe director trying to squeeze more than one scene out of the day while still paying me for one…BUT…these weird experiences are also exactly what’s shaped me into a no-nonsense boss bitch with clear boundaries and zero patience for sketchiness or bullshit.

This is where I’d like to say that yes, everyone is doing drugs and having sex with each other all day. But alas, ’tis not that exciting. lmao. But I’ll get to that.

If it’s a boy/girl scene, the male talent doesn’t get to set until later…that means after my hair and makeup is done and my pretty girl photos have been taken.

What are pretty girls, you may be wondering?

Pretty girls are glam pictures taken of the female talent in the outfit she’s wearing for the scene, then bra/panty set, then nude/hardcore. They’re, well, pretty photos of a pretty girl to promote and go with the overall scene. If there’s another female performer in the scene with me, we’ll each do solo pretty girls, and then get together to take the photos together.

So, we’ll take the pretty girls, and then we’ll usually start filming the scene intro. If it’s a dialogue scene, I’ll also rehearse dialogue with my scene partner first. Sometimes we’ll take the sex stills beforehand, so we can just film the scene and wrap when it’s done (sex stills are exactly what they sound like).

As much as I love to act, gonzo scenes are my favorite because they take WAY less time. (Gonzo scenes are where there’s little to no dialogue, just straight up sex). Personally, I am ALL about efficiency! Dialogue sometimes can take HOURS to film, depending on the company, efficiency of the crew and how in-depth the scene is. Talent rates are the same whether it’s a gonzo scene that takes two hours to film or an in-depth dialogue scene that takes 6.

With dialogue, we often have to do different takes of the same line so the cameras can get different angles (close up on everyone in the scene, close up on one person, POV from one person, etc).

If it IS a dialogue scene, we’ll film all of that, and then stop right before we get to the sex part.

At this point in the day, we’ve likely been filming for a few hours, so we’ll break to freshen up before we film sex. Now, SOMETIMES, if it’s a LONG day, or if the crew has another scene to film after mine, which is also common, this is the point where we might decide to break for a snack/lunch. There’s always lots of snacks, goodies and water, coffee and energy drinks in the kitchen (yes, that means NO BOOZE), so this would be a time to break, chill, eat, and then get back to work.

And then…go time! The sex is almost always the easiest part of the day because, as a performer, it’s what comes most naturally. And, unless I’m working with a newbie, the talent I’m working with is a seasoned pro, so we bang it out seamlessly and finish.

And then…that’s it! I’ll collect my stuff, shower (ALWAYS pee after sex, bonus points if you shower), pack up, collect my moolah, say goodbye to everyone, and be on my merry way.

That means that the only people on set who are having sex are the talent involved the scene. No crew is EVER involved (it feels weird to even type that lmao). It’s just NOT that vibe at ALL. The vast majority of the time, everyone there is a professional there to do a job.

That also means that no, nobody is doing drugs. At the MOST, some people might be slipping outside to smoke a little weed. That’s it.

The only shadiness that I’ve ever experienced, like I said, I can count on one hand. Just like literally ANY other job, the adult film industry has ALL kinds of people in it. And, certainly, some of these people may be inclined to do shady shit. There are also shady teachers, lawyers, doctors, etc. So this is not specific to just the adult film industry. It’s simply part of the human experience.

As a wise man once said…”And if ya don’t know, now ya know.”