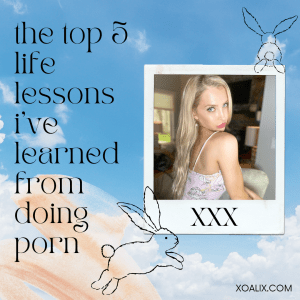 I have my BA in Broadcast Journalism. One of the first lessons I learned in college was that the news doesn’t report on good shit, because nobody would want to hear about it, and therefore nobody in the biz would make money. This is also why I heavily limit my consumption of news as a whole, and only get mine from select sources I deem reliable. So the moral of this story here is, it’s a good idea to learn how to think critically, and for yourself. But I’ll save that for another post.

The reason why I bring this up is because I’ll forever be an advocate for the adult entertainment industry, and sex workers, no matter where my life takes me. Certainly, different people have different experiences in the adult biz. It attracts ALL kinds of people from ALL walks of life, and everyone has their own reasons for joining. I absolutely do NOT discredit anyone who hasn’t had a good experience in the ‘biz. All I can do, however, is share my own experiences that I’ve lived, from my own point of view.

It should also be noted here that every single business industry on earth is comprised of all kinds of different people, and it’s weird as fuck to me that people are judge-y towards sex workers as a whole, but if one teacher, for example, gets in trouble for doing shady shit, people don’t stigmatize ALL teachers on earth because of it. See what I’m saying?

1. Lots of people are into freaky shit.

As long as you’re not harming anyone or doing anything illegal, nor is your freaky side actually interfering with your day-to-day life, then fucking ENJOY it! Life is meant to be lived, and sex is JUST as normal as the need to eat and sleep.

The fact of the matter is that if there is a higher power, I can promise you I know this much: Nobody gives a fuck in this life or the next as to what you enjoy sexually here on earth. Again, speaking from a place of you’re not doing anything illegal and your x-rated activities aren’t fucking up other stuff in your life.

It’s not the place of any one human (or many) to dictate or judge how other grown adults should live their lives, no matter what anyone says. That’s just some made up fuckery from centuries ago that humans started so they could have power and control over others. So the moral of this story here is: Get your fucking freak on and put your blinders ALL THE WAY UP to anyone with a “holier than though” attitude when it comes to sex. You’re welcome.

But those wild positions you see, where women are sucking dick upside down while the guy holds their ankles, taking a hard pounding in the ass for an hour straight, the stepfamily taboo craziness…that’s reserved for the small screen (especially the latter. lol). It’s all fantasy by adult actors, for adults at home to enjoy. That’s it. Just like video games and movies you would see on the big screen.

4. All bodies are different.

Pre-porn, I was self-conscious of parts of my bod just like anyone else. After seeing SO many different humans (especially fellow females) in the nude, I’ve learned that mainstream beauty standards are fucking stupid and also just trends (just like fast fashion), and to NOT follow them unless I truly felt aligned with whatever enhancement I was considering. Plastic surgery is absofuckinglutely fine (lord knows I’ve had my fair share) but after spending so much time in the adult biz, and seeing SO many gorgeous women of all different shapes and sizes and body types, I’ve learned that beauty IS truly in the eye of the beholder.

Experiencing this helped me SO much in becoming confident and comfortable in my own skin, as ME. Not a weird version of someone else. And, when you’ve been naked in front of millions and millions of humans, it’s a sense of empowerment and liberation that is unexplainable. The world has seen you at your most vulnerable, and you’ve seen the truth firsthand of how real bodies of real sex symbols actually look (ALL different), you realize that just being YOU is enough. I no longer compare myself to others wishing I looked a certain way the way I used to back in the day.

5. The best sex is with someone you love.

Cliché? Maybe. Cheesy? Maybe. Do I care? Please see #3. My house, my thoughts! This is what I know to be true. I’ve done some wild shit, but literally NOTHING compares to sex with someone you love and have a strong emotional connection with. The key is to be present, communicate, and find your right-for-you balance of giving and receiving. If you wanna try freaky shit, do it with someone you love. It’s WAY more fun that way.